Born out of our farming experience

Many of you may be new to farming and may have “inherited” a dead, diseased soil with little soil function and might not be aware of the true potential of what lies beneath your feet. Your soil was once fertile. As an illustration of how soil function can be restored, we would like to share the story of Ecosoil’s founder, Jako Pieterse. 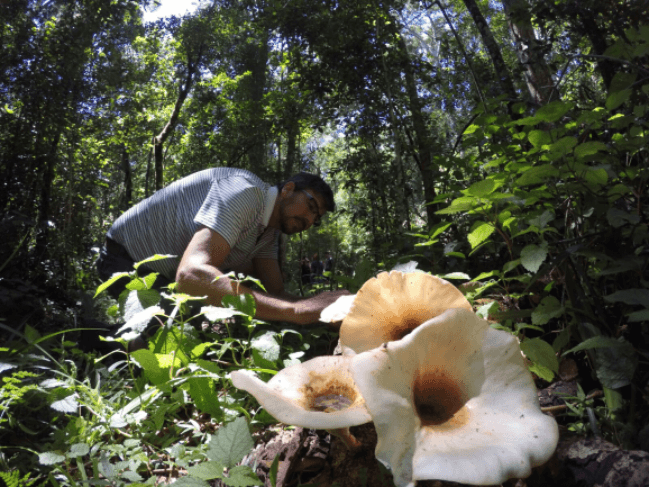 My mind-shift happened in 2000 at a farm study group meeting covering organic farming. During this time, I was managing a conventional fruit farm for 10 years. The farm was developed on virgin land from scratch, using the best technology and techniques known at that time. I had a keen eye for observation and could see changes happening on the farm.

During the first 5 years we experienced only a couple of minor production issues but this gradually changed to a point where certain pests and diseases became major problems. This happened despite following meticulously conventional spray programmes and doing everything “according to the book”.

At this study group meeting we had an organic wine farmer giving a talk about soil health and it being pivotal to the success of organic farming. As he explained the importance of microbial diversity and the importance of root exudates, I had an epiphany. For the first time I could understand the reason for the downward spiral on the farm I was managing at the time and appreciate the importance of soil microbes.

It took us 5 years of monoculture and the use of pesticides, fungicides, weedicides and synthetic fertiliser to destroy the microbial diversity to the extent that pest and diseases could no longer be controlled naturally. Once the diversity was gone, everything went downhill from there. Many pests became problematic and were difficult to control chemically. Soil compaction and water infiltration also became a problem. We were applying 3 times as much nitrogen than what was actually removed by harvesting the crop.

Having realised the root cause of the problem, I looked into various options to restore soil health. Compost Tea was something new in the year 2000, and it promised to be a cheap and effective option in restoring soil health. I was one of the early adopters and applied Compost Tea through the irrigation system and also did foliar sprays to see if I could control pests and diseases that way. All prunings were kept on the “bankie” and weeds were utilised to grow tall before being killed by a weedicide. This allowed us to feed the micro-organisms and make compost in the orchards, a far more economic and easy solution to restore soil life.

It took a year before I saw results, but I was amazed at how well it worked. Weevils, that were previously a huge problem, became manageable within the second season of using Compost Tea and it was no problem at all after 3 seasons.

Many other pest and diseases were controlled and soil compaction was completely eradicated. Over 5 years, we lowered our nitrogen applications by 70% and stopped applying phosphorous completely. Our trees were looking and growing better than ever before.

The take away message of my story is:

I was absolutely fascinated by what I experienced. Nature is very complex but effective. By studying nature, we come to appreciate the interconnectedness of everything and the intelligence involved. By embracing nature, working with her natural rhythms and cycles, we can farm much more effectively and regeneratively.

Eventually in 2005 it became clear that I needed to do this work full time and that is when Ecosoil was born. Since Ecosoil’s humble beginnings, we have helped numerous farmers farm more regeneratively. We continuously reinvent ourselves, adopting new strategies and products that are researched and tested. Ecosoil is based in Grabouw, Western Cape and distributes nationally as well as selected SADC countries.

I would like to give credit to those scientists I have learned from and of whose material I have used so liberally. Most notably in this regard are Dr. Elaine Ingham, Dr. Christine Jones and Graeme Sait. There are many others whom I quoted verbatim. To them all our sincerest appreciation is expressed for their contribution to science and the earth in general. It is important that the message of soil health is spread as far and wide as possible.

Ecosoil provide customers with eco-friendly technology, products and services that will enable them to do business in a more profitable and regenerative manner. This will be achieved by creating a more balanced system, by rehabilitating degraded soil, by providing eco-friendly alternatives to purely chemical products and by the transfer of knowledge.

Our products are transformative in nature. They transform marginal soils into productive, life sustaining soils. They transform disease prone crops with low nutritional value into healthy, vibrant plants with high nutrient density. People and animals consuming these crops are healthier and less prone to disease. Our products aids carbon sequestration in the soil that have a positive impact on global warming.

We work closely with nature on a co-creative basis to maximise the transformative and healing properties of our products. Our people understand and appreciate the consciousness found in nature and sees the benefit of embracing this philosophy. We treat each other, plants, the soil and nature in general, with outmost respect and wonder, because on some level we are all connected – ultimately with God. The energy of our raw materials, the intent of our people, the effectiveness of our production processes, our integrity and ability all influence the quality and efficacy of our products and ultimately, how well it is received in the marketplace.

Since Ecosoil’s humble beginnings in 2005, we have helped numerous farmers farm more regeneratively. We continuously reinvent ourselves, adopting new strategies and products that are researched and tested. Ecosoil is based in Grabouw, Western Cape and distributes nationally as well as selected SADC countries.